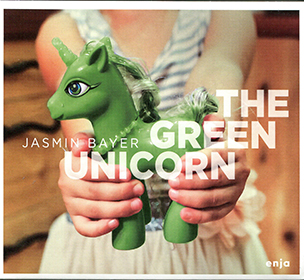 “Jasmin Bayer’s supple, engaging voice comes into its own on THE GREEN UNICORN perfectly well in both tender, touching ballads like Pale side of the Moon or in more robust, rhythmically emphasized titles like Pimp me up or The Green Unicorn itself. She knows how to captivate her audience in very different ways which might be at the basis of her steadily rising success. On her new CD Jasmin works with her meanwhile brilliantly experienced trio which is further supported by two extraordinary soloists, the French baritone saxophonist Céline Bonacina and the formidable trumpeter Axel Schlosser who takes care of the solos in the Radio Big Band HR, Frankfurt and is also involved with great projects (Mozart Reloaded) and concerts with the Frankfurt Brass Band and avantgarde musicians like Carla Bley, Steve Swallow, Olav Poltziehn.“ — Matthias Winckelmann, ENJA Records

“(…) A woman re-invents herself. (…) No doubt: she succeeds. Jasmin Bayer crosses over every second authentically in this fine, well established club. She knows how to carry with her and her blending of elegance, grace, passion and dedication plus the songs between jazz standards and  familiar pop themes puts a smile on the faces of her audience. Especially in quiet, intimate passages like Unforgettable when her flexible, punchy combo takes it easier and she just lets herself go into the emotionality of the few notes this late starter has her strongest moments. Her anguish, the melancholy but also the exuberant joy is accepted every second. Her voice convinces with a warm sound roughened by little harder peaks, always variably expressed – inevitably derived from her content and flow.” — Augsburger Allgemeine, March 2018, Reinhard Köchl about Jasmin Bayer’s performance at the jazz club Birdland, Neuburg

“The Green Unicorn is a step to the next level for Jasmin Bayer. She no longer relies on existing repertoire, but together with Davide Roberts composes original songs which shape the program of the album. These are also about love and day-to day life, the small and the great escapes, but they are now her own  and not those of others. Jasmin Bayer builds a new foundation here, to build her vocal expressivity on and to reference classics such as John  Barry or also Elvis Presley. Moreover, guest musicians help her to perfect the concept of the album. On the one hand the French baritone saxophone player Cèline Bonacina contributes powerful lines and improvisation, and on the other trumpeter Axel Schlosser  demonstrates that he is a master of melodic phrasing and elegant soloing. The Green Unicorn results in a self-aware, confident statement of an artist who has found her second calling, with Soul, Swing and a touch of the Blues.“ — Ralf Dombrowski

“Here it is, Jasmin Bayer`s second album, in the shape of a Green Unicorn. The cover promises a girlish, cute toy, that you do not want to let go right away and which maybe transports you into another enchanted world of fairies and other beings. The same eponymous piece (No. 4 and written by Jasmin Bayer and Davide Roberts) promises finally a unicorn that twinkles and gives a new luster until even the eyes smile. Jasmin Bayer sticks to her skills and her path: the album is characterized by jazz and blues is versatile, charming, partly elegant – partly playful and most of all authentic as now original compositions are predominant which are an effective double play of Bayer – Roberts creating a room  equally for liberty and order. The range of  the vocal qualities contextually bonded should be mentioned and gives depth. The additions of French Céline Bonacina`s baritone saxophone and the fluegelhorn/trumpet of Axel Schlosser are true enrichments and do well for the overall picture. Jasmin Bayer acts with plenty of comittment and persuasiveness, everything is trustworthy and artistically convincingly resolved.“ — Claus Friede

“(…) Jasmin Bayer’s versatile voice displayed the exuberant joy of life as well as melancholy and real mourning. She sang the James Bond title song “Skyfall” in it’s typical dramatic way and with that certain twinkle in her voice she performed “The Green Unicorn”. Her congenial companion, Davide Roberts, performed with his temperamental and explosive musical enthusiasm in his solo parts, to take back with fine sparkling piano playing and precisely set counterpoints. A positive surprise was the extremely attentive, finely tuned trumpet played by Florian Brandl. Markus Wagner on bass as well as Christos Asonitis on drums showed their fine improvisational mastery. The audience appreciated that with ripples of spontaneous applause and a rapturous final applause that wouldn’t stop.” — Passauer Neue Presse, February 2018, Uli Brunnlechner about the concert in Stadtkino Trostberg

“(…)Traunreut. A selected cirle of jazz interested listeners were granted a special musical pleasure in the k1 studio. Five musicians were on stage who had more than pleasure to play music together but who drew their energy flow from the positive reactions of the listeners. When the attractive lady in her floral dress increased her vocal the next  pleasant surprise followed: with a wam timbre and with vocal elegance she presented sonorously jazzy-balladesque sensuality. Well known jazz and ballads standards went hand in hand with her well succeeded own profound compositions which also refers to the lyrics introduced by Bayer in short sentences. This way listening is fun.(…)“ — Passauer Neue Presse, February 2019, Kirsten Benekam

“(…) Jasmin Bayer & Band started their first concert at the Sonthofer Kulturwerkstatt with this wonderful swinging title “Come Share This Minute”, an original. The audience was fascinated that they would love sharing their time and the evening listening to the music. All the originals of Jasmin Bayer & Band made that night a night to remember with all of the soli of Davide Roberts p, Markus Wagner b, Christos Asonitis dr and Florian Brandl tp/flh (…)” — Allgäuer Anzeigeblatt, September 2019, Marion Bässler

“The versatile singer managed to get a hold of the audiences attention in no time with her informative and emotional presentation as well as through her versatile voice.” — Passauer Neue Presse, October 2019, Uli Brunnlechner about the Jazz Matinée at Stadtkino Trostberg 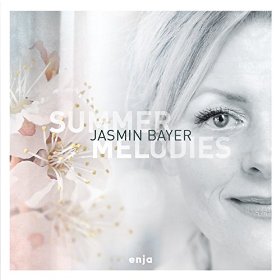 “Jasmin Bayer is a discovery. Her jazz concerts show a talented and experienced singer with her own repertory as well as standards, an immaculate warm intonation, a charismatic stage presence. This is her first album that might be a surprise for many. Her CD is very different to the often heard US Songbooks, very individual, for Jasmin writes the majority of her repertory herself and composes together with her pianist Davide Roberts.” — Matthias Winckelmann, ENJA Records

“(…) Everybody in the club will be thrilled and swept away by this album with finest swing and finest Straight-ahead Jazz.” — KulturNews

“(…) Bayer knows every trick in the book: she has an immaculate pronunciation and articulation, great feeling for rhythm, her voice can be sensual and affectionate as well as full of sarcasm.” — KulturNews

“”Straight-ahead Jazz” is the perfect description of Jasmin Bayer’s debut album “Summer Melodies”. Musicologist Ekkehard Jost could have taken her musical cosmos as the perfect example for his “Sozialgeschichte des Jazz in den USA”!” — KulturPort

“Jasmin Bayer is rooted in tradition of great vocalists without imitating them – with her voice refined in all nuances and the rhythmically relaxed phrasing!” — Kultkomplott, 2016

“There was a phase in the history of jazz in the 1950s and 1960s that combined elements of Swing, Modern Jazz and Latin to a classical art form. Stars like Billie Holiday, Lester Young or Chet Baker belonged to that era. Singer Jasmin Bayer together with Pianist Davide Roberts composed jazz songs out of that spirit. (…) Right away the audience was introduced to that mood and feeling of being in a New York jazz bar, for Jasmin Bayer sang with the “black” timbre and her four musicians didn’t spare with Swing and Blue Notes (…)” — OVB, June 2017, Richard Prechtl about the concert at Le Pirate, Rosenheim

“(…) Her program “Summer Melodies”, corresponding with the current album by enja Records, the temperamental singer with the strong vibrato offered light but never shallow entertainment. The songs, often with a Latin touch and full of esprit, especially with the virtuous, brilliant soli of pianist Davide Roberts and trumpeter Peter Tuscher put the audience in the enjoyable mood for prolonged applause.” — Mittelbayerische Zeitung, Michael Scheiner about the concert at 36. Bayerisches Jazzweekend, Regensburg